The art of life

At home I have a lithograph from the movie Bambi, released by RKO Radio Pictures on August 13, 1942. The lithograph is signed by Marc Davis, and depicts Bambi the deer in the woods with his friends, among others Thumper the rabbit and Flower the skunk.

Davis was responsible for designing Thumper and Flower, as well as animating them. He was also involved in animating Bambi. In English, the verb animate means to give life to, or to make lifelike. In Norwegian to animate means to encourage or incite someone. Thus one can say that he encouraged them to come to life.

When I look at this lithograph, I am not thinking of it as stagnant art. The first thing that strikes me when I see it, is life. Actually, it isn’t art at all, I think, what is more, it’s a separate world, a separate dimension.

The animals in this picture are not just graphical representations of animals, or a simple two-dimensional representation of zoomorphic figures, such as one might have imagined that they would have been only a few decades earlier, in the 1920s.

No, these animals have their own voices, their own personalities, their own patterns of movement. Appearance wise, they’ve got anthropomorphic traits and, as such,  borrow from thousands of years of western tales of centaurs, minotaurs and fauns. But in the way they move, they’re one hundred percent realistic and convincing. So much so, in fact, that their movements were based on live animals which were transported to the folks who created the film, including Marc Davis.

The lithograph hanging on the wall at home is of course just that, a lithograph. It has no movement, other than those you create yourself by filling the gap between fantasy and reality inside your own head. But for anyone who has seen the movie Bambi, the distance between standstill and motion is infinitely smaller than it would be if, for example, you compared the lithograph to one of Leonardo da Vinci’s many animal sketches.

If we’d been able to place Leonardo da Vinci in a movie theater on 13th August 1942 and shown him Bambi, he would either have ran out in consternation, fainted, attempted to kill anyone around him for attempting witchcraft, or fallen in love. Leonardo was an outstandingly brilliant man who was ahead of his time in many areas, so I’m holding out hope for the latter

On the same wall where I’ve my lithograph from Bambi, I also have a drawing of Princess Aurora from the movie Sleeping Beauty. It isn’t signed, so I don’t know if it was drawn by Marc Davis, but I like to think that it was. In the drawing, she’s bending down to pick flowers into a basket that is hanging around her arm. 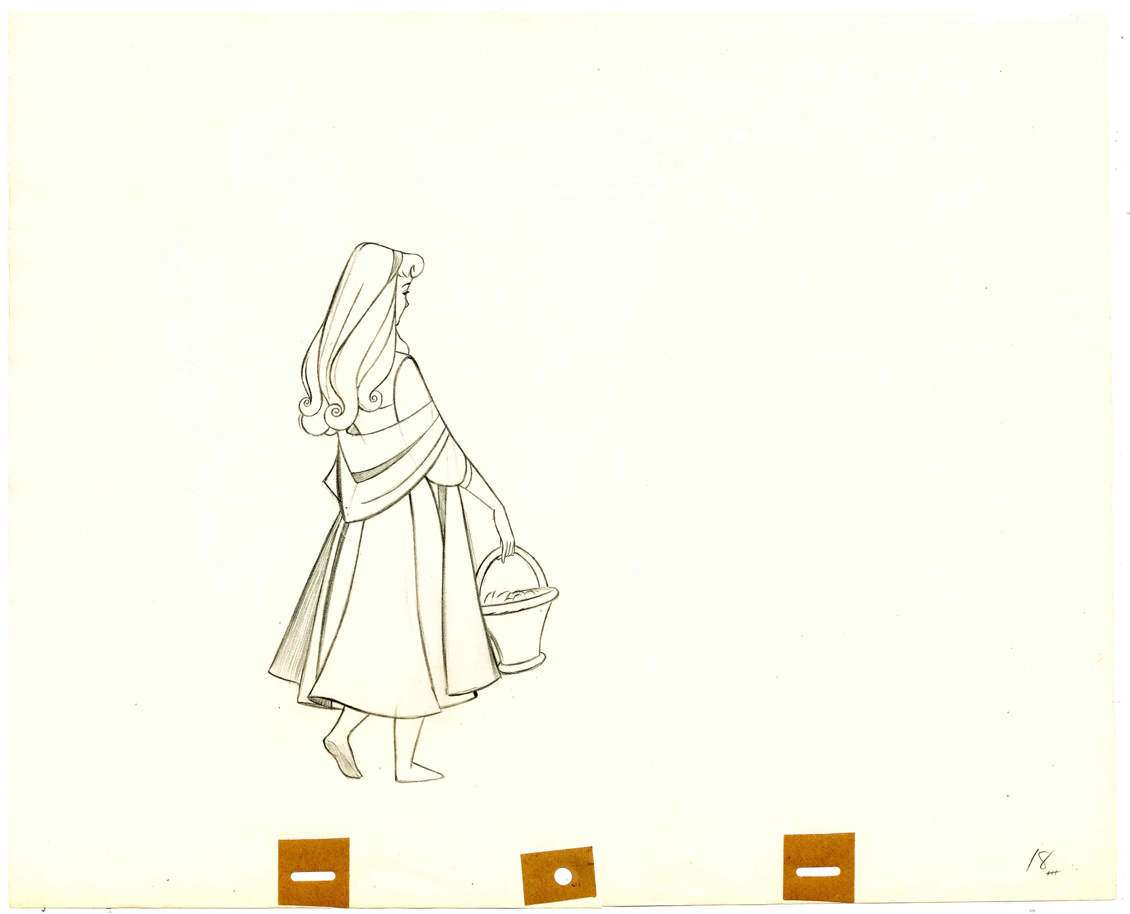 This drawing depicts not only a girl in the woods picking flowers. Or for that matter a princess who is dressed in ordinary clothes, missing shoes and have a basket in her hand. This drawing is a drawing of Aurora. She’s a real person, with a wonderful singing voice. A young girl who is goodness itself, cares about everyone around her, and falls in love with Prince Phillip.

Anyone who has seen the film Sleeping Beauty know what I mean. They know that Aurora is more than the sum of the drawings which Marc Davis drew to produce her. Here’s the thing, he didn’t draw her – he blew life into her. Interestingly the animators at Disney ditched many of the drawings when they finished a film. Whether they deliberately made sure to drive up the future price of the art they produced was doubtful – it’s more reasonable to assume that they didn’t see the illustrations as art. Or, maybe they did, but they weren’t looking to create art, they were looking to create life. The drawings and the hand painted backgrounds they were filmed against was, for these artists, only a means to an end. It was only when all the drawings had been filmed in the correct order that they fulfilled their purpose: that was when they came to life.

Walt Disney’s foremost animators, which he nonsensically referred to as the Nine Old Men (a name Franklin D. Roosevelt gave to the nine judges of the US Supreme Court), never looked at his drawings merely as art. For them, they represented living, breathing characters, and they used themselves as actors use themselves, to give life to them.

When contrasting Aurora with the evil fairy Maleficent, which Davis also designed and animated, one gets an insight into the personality of the man who created her. Maleficent happens to be Auroras antithesis. Where Aurora represents all that is good in the universe, Maleficent represents  all evil. She isn’t only angry, or bitter, or good – she is downright evil. Nothing good can unfold through her, and if she ruled the world it would have been a hell. Throughout the film Sleeping Beauty she captures Prince Phillip in a dungeon deep underground, attempts to kill Aurora, surround Phillips castle with a thick wall of thorns, transforms herself into a dragon and attempts to kill Phillip.

A man who managed to blow life into two such different personalities, must have been an artistic volcano, a wellspring of ideas, an exhaustive source of creative genius.

The proof comes to theaters this summer: The movie Maleficent about the evil fairy that Davis gave life to. A life so menacing that Maleficent is called called the greatest villain through all Disney’s movies, ever. Most people who see the movie probably won’t know anything about the man who created her. Many people are probably too young to know that Maleficent has had a long life, which began long before Angelina Jolie agreed to play her.

I wonder what the man who created her would have thought if he could have seen the film when it premieres. I bet he would have been proud. Either way, it would have scared the living hell out of Leonardo.